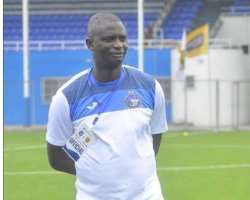 The two-time African champions are in a tough-looking Group A alongside Orlando Pirates of South Africa, Algeria's Entente Sportive Setif and Al Ahli Benghazi from Libya.

Enyimba qualified at the weekend when they pipped Nigerian rivals Rivers United 5-4 on penalties after the two-legged tie finished 1-1 on aggregate.

'The People's Elephant' open their group campaign at home on March 10 against Ahli Benghazi.

"It's a tough group, I believe none of the teams is comfortable with this pairing," admitted Osho, who calls his own brand of football "Sugar Football".

"All four teams are very experienced playing on the continent.

"We respect our opponents, but we remain positive and our immediate target is our first game against Benghazi at home," Osho said.

"Victory in our opening game will certainly put us in a good position but it will be one match at a time.

"We have a good chance of winning this trophy."
This will be Enyimba's fourth appearance in the competition with their best performance being three years ago when they reached the semifinals.

Dolphins – now part of Rivers United – boast the best Nigerian performance when they were beaten finalists in 2005, while Sunshine Stars are also past semifinalists. (AFP)