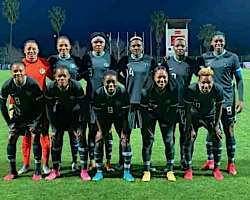 The Super Falcons of Nigeria defeated their African counterparts, Equatorial Guinea in the last game of th Turkish Women's cup in Antalya to emerge winners of the tournament.

Falcons recorded an emphatic 9-0 victory in the encounter played in the early hours of Tuesday at the Emir Sport Complex.

Glory Ogbonna opened the scoring for Falcons eight minutes to the game and four minutes later, Toni Payne was brought down in the box and Asisat Oshoala scored from the spot.

Few minutes later, Asisat Oshoala converted from the spot again for Falcons to score her second goal of the encounter.

Charity Adule was booked for a professional foul.
Barcelona Femini forward, Asisat Oshoala scored a hat-trick with a fine individual goal after beating the goalkeeper to the left side of the opponent goal post.

After the half-hour mark, Uchenna Kanu scored the fifth goal with an assist from newly invited, Toni Payne. two minutes Charity Adule scored to make it 6-0.

Monday Gift scored the eighth goal of the encounter.

Asisat Oshoala crowned the game for the Falcons with the ninth goal and her fourth of the day with five minutes to go.

An Equatorial Guinean defender was sent offafter bringing down Ramat Abdulkareem in the 87th minute.

The super Falcons have won 3 of their matches and scored 11 goals in the tournament.