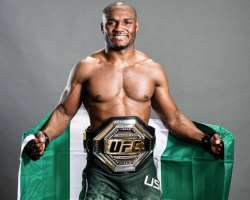 Kamaru Usman, popularly known as the Nigerian Nightmare Usman defeated Burns, his former teammate, via TKO at 34 seconds of the third round to defend his UFC welterweight title in the main event of UFC 258 in Las Vegas.

Usman landed a right hand as he was switching stances to floor Burns, then slammed Burns with punches on the ground until referee Herb Dean pulled him off.

"Gilbert is a guy that I've known from the start," Usman said in his postfight interview. "I love him. This one was tough for me to deal with."

Usman picked up his 13th straight win, surpassing legend Georges St-Pierre for the most consecutive wins in UFC welterweight history.

Only Anderson Silva has won more than 13 straight fights in UFC history, winning 16 in a row from 2006 to 2012. Usman is tied with six other fighters with 13 consecutive wins.

Usman and Burns were teammates in South Florida since 2012, first with the Blackzilians and most recently with Sanford MMA.

Usman departed for Colorado to train under coach Trevor Wittman last year after the initial fight with Burns was scheduled for July.

But Burns tested positive for COVID-19 and withdrew from that bout. Henri Hooft, the longtime head coach for both Usman and Burns, did not corner either man and said he would not even watch the fight.

"Guys, you cannot discredit what Gilbert Burns has done in this division," Usman said. "We started together. We started this journey together, and he showed it tonight. He went in there and put it all together."

Usman, 33, was coming off a unanimous-decision win over Jorge Masvidal at UFC 251 last July. (ESPN)