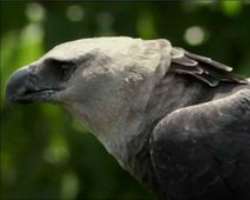 
Close encounters with giant eagle
A BBC film crew has filmed the intimate life of one of the world's largest and most powerful eagles, the harpy eagle of Central and South America.

In doing so, the crew survived a flyby attack by a primate-hunting harpy.

Despite their huge size, the birds are notoriously secretive, and are rarely seen in the jungle tree tops.

Yet during the shoot, the filmmakers recorded extraordinary footage of a family of the eagles, including the raising of a single chick to adulthood.

Four eagle species vie to be the world's most fearsome bird of prey: the Steller's sea eagle ( Haliaeetus pelagicus ) of north-eastern Asia; the Philippine eagle ( Pithecophaga jefferyi ) of South-East Asia; the martial eagle ( Polemaetus bellicosus ) of Africa and the harpy eagle ( Harpia harpyja ), which ranges from Mexico in Central America to Argentina in South America.

Each is slightly different in height, weight and wingspan, with the harpy eagle standing up to one metre tall with a wingspan of two metres.

Female harpy eagles are up to 40% larger than males, and can weigh up to 9kg and possess talons measuring up to 13cm long.

Usually they hunt and kill monkeys, which can weigh as much as the eagle itself. The birds will also take sloths, young brocket deer and collared peccaries, a type of jungle pig.

However, their jungle lifestyle, living among the dense thick canopy of rainforest spanning the Amazon, makes them difficult to study or observe.

Nest cam
So BBC wildlife film maker Fergus Beeley and a team of producers and cameramen set out to overcome these challenges and record over the course of a year a family of Harpy eagles living in the Orinoco rainforest of Venezuela.

“The overwhelming sensation you get when you see these birds in the wild is that you're not looking at a bird, but at a dinosaur. They have a posture and a visage that is quite menacing,” says Mr Beeley.

The team's film, “The monkey-eating eagle of the Orinoco”, will be broadcast by the BBC as part of the documentary strand Natural World.

To film the eagles, the team set up a camera in a tree opposite one in which a pair of harpy eagles had created a nest.

They then followed the fate of the eagles as they hatched and raised a single chick, having some extraordinary encounters along the way.

As well as filming the male eagle returning with dead monkeys and sloths to feed his family, the film crew themselves came under repeated attack from the eagles, forcing the crew to wear protective helmets and bullet-proof vests for their own safety.

On one occasion, the female Harpy flew perilously close to film crew member Graham Hatherley, who had climbed the tree to rig a remote camera closer to the eagles' nest.

Then during a second climbing expedition, to fix the nest camera, she directly attacked Mr Hatherley (see video above), dislodging his microphone, stunning him.

Both cameraman and eagle survived the incident unscathed.

The female harpy's feet are the size of a human hand, says Mr Beeley.

“But on each of her toes, she's got a talon which is as large as my thumb. She's devastatingly well armed and she is armed in order to take out large primates. We were never potentially lunch, we knew that, but at the same time there was absolutely no fear on her part.”

But while most filming was done from a safe distance, the two brief instances when the film crew, which also included James Aldred and Adrian Seymour, approached the nest provided valuable scientific information about the eagles' behaviour.

The nest camera recorded hours of never-before-seen footage of the Harpy eagle growing in the nest.

The filmmakers also established that the harpy eagle chick stayed at the nest tree for at least a year after hatching, much longer than chicks of most other eagle species.

This may be because of the birds' unique and highly specialised hunting habits, which can take months to learn.


The Orinoco rainforest, home of the Harpy
Although there is yet no scientific evidence to prove it, the filmmakers suspect adult harpy eagles do not actively hunt monkeys close to the nest tree.

Instead, they purposely leave them, providing the young chick with a bountiful hunting ground close to home, where it can practise its hunting skills until it is ready to move on.

“There's something remarkable about how an eagle can hone a way of life in the jungle,” says Mr Beeley.

“When there is a large predator in the open you feel a bit more comfortable, you know what's going on.

“But if there's a large predator in the thickets, it's always slightly more suspenseful.”