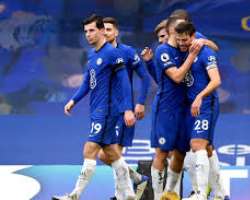 Azpilicueta's fellow Spanish defender Alonso added a classy second late on, skilfully controlling a Christian Pulisic cross before lashing a volley over Pope at his near post.

The impressive Hudson-Odoi was unlucky not to score in between with a shot that was deflected on to a post by Burnley defender Erik Pieters.

Chelsea comfortably registered a second successive clean sheet under Tuchel, whose first game was the midweek goalless draw with Wolves, as Burnley did not manage a shot on target.

The only downside for Tuchel was Timo Werner's failure to score for a 12th league game as Chelsea climbed three places to seventh in the table, while Burnley remain 15th. (BBC)