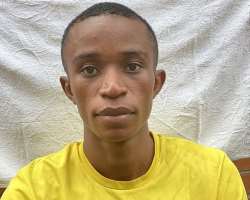 Etim, who has played both in the U-17 National team and U-20 National team respectively is considered to be the exact replica of Wilfred Ndidi who's currently in Leicester City.

Speaking to Sports247, he added: "I’ve always had to prove myself, so it’s normal. I have had to play under two different coaches in FC One Rocket before I was asked to join them, and I was able to prove myself worthy of the first team."

According to the club manager of Blessed Stars Football Academy, Moses Ukpong, Defender Charles Etim is expected to be in FC One Rocket for only one season or less pending when he is to sign a document with his new team in Europe. The club's agent Mr Ojo Paul Omamomo during an interview also disclosed that they had secured a deal for the player worth over €1 million.