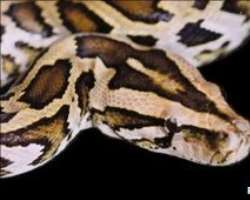 An exotic snake used by a traditional doctor in South Africa hoping to affect the outcome of World Cup matches has been seized by animal welfare inspectors, a spokesperson says.

The 2.8m-long Burmese Rock Python was rescued after local police alerted the Society for the Prevention of Cruelty to Animals (SPCA) in Cape Town.

The snake was found in a poor state in a shack in Nyanga township where people visited the traditional doctor for consultations.

When the python, called 2010, was found, she had pneumonia, mouth-rot and was underweight and dehydrated.

“The snake was living in totally unacceptable conditions and has since been taken to a specialist reptile veterinarian and is responding well to treatment,” SPCA spokesperson Sarah Scarth told the BBC.

Many people throughout Africa pray to ancestors and believe they have the ability to change or influence the future.

People will pay traditional doctors, known as sangomas in South Africa, to communicate to the ancestors on their behalf.

During rituals, animals are sacrificed to appease the ancestors but some traditional doctors use animals as mediums to communicate with them.

“People were paying the sangoma to ask the ancestors to help the teams they support to advance in the tournament,” said Ms Scarth.

It is not clear which teams the snake was being asked to help.

2010 was apparently transported from Natal to Gauteng specifically for the World Cup.

But Ms Scarth said the sangoma surrendered the snake last week after her organisation visited his home.

No charges were laid against the sangoma but the SPCA said it is investigating how the snake was transported without the legal papers.

Exotic animals cannot be transported without the legal paperwork authorising their transit.

“We have investigated sangomas in the past but this is a first during the World Cup,” Ms Scarth said.

Last month, aquarium owners in Germany said they had an octopus which had been correctly predicting the outcome of matches.