Laliga: Barcelona Beat Elche To Move Up To Third 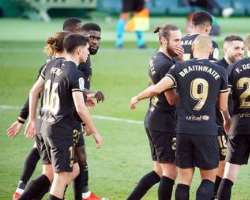 Frenkie de Jong scored one goal and created another to send Barcelona third in La Liga with victory at Elche.

De Jong converted from close range after Elche defender Diego Gonzalez diverted a cross towards his own net.

The Dutchman broke clear late on and clipped a cross to the back post for Riqui Puig to head in his first senior goal for Barca on his 25th appearance.

Elche should have levelled in the second half when Emiliano Rigoni ran clear but his effort was saved.

The visitors could have added to their tally but goalkeeper Edgar Badia was in inspired form, making stunning saves to deny Ousmane Dembele and twice from Trincao.

Elche extended their winless run to 13 games and stay in trouble in the relegation zone, two points from safety, though they do have two games in hand on 17th-place Osasuna.(BBC)