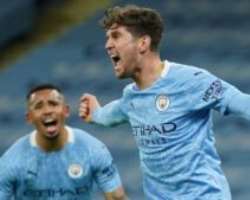 The resurgence of John Stones continued on Sunday as he scored twice in a 4-0 win against Crystal Palace, with Kevin De Bruyne registering his 100th Manchester City assist.

Crystal Palace were unbeaten in their last two visits to The Etihad, but Man City were in control throughout and took the lead with a milestone goal. De Bruyne nabbed his century of assists when Stones (26) nodded home his first Premier League goal for the club.

Man City added another shortly after the break with a sensational strike from Ilkay Gundogan (56), before Stones (68) slotted home his second of the evening after Vicente Guaita had initially saved Ruben Dias’ header in his first-ever Premier League double.

Raheem Sterling (88) rounded off the victory late on with a sublime free-kick as Man City extended their winning run to five Premier League games.

It was the perfect way for Pep Guardiola to mark his 50th birthday on Monday as Man City leapfrog Tottenham, Liverpool – who drew 0-0 with Manchester United earlier in the day – and Leicester into second, two points behind United with a game in hand. Crystal Palace remain in 13th and failed to have a shot on target.Advertisement How Man City swept Crystal Palace away

The opening 25 minutes were rather quiet by all accounts with Man City seeing some half chances and Crystal Palace doing well in attack, even without star man Wilfried Zaha.

The hosts saw the first real opening as Sterling drove forward after some poor control from Joel Ward and played in De Bruyne on his left, but his squared cross was seen away by Ward. Also See:

A minute later and Man City took the lead. De Bruyne’s initial corner was cleared by Luka Milivojevic, but only as far as Sterling. He then picked out the Belgian again on the right wing, who lofted a wonderful cross into the area, which was nodded home emphatically by Stones.

It was the defender’s first Premier League goal since April 2015 as De Bruyne registered his landmark Man City assist.

Subs used: Riedewald (5), Batshuayi (5).
Man of the match: John Stones.
The hosts could have added a second shortly before the break. Bernardo Silva floated a cross into the area, which was headed on by Gundogan. Gabriel Jesus was waiting in the middle to head home, but James Tomkins did just enough to put him off, with the ball landing safely into Guaita’s hands.

Much like the first half, the second started rather quietly but it was brought to life with a stunning goal from Gundogan. Silva’s corner was cleared by Milivojevic, but Andros Townsend could not keep the ball under his control. Gundogan nipped in to take it, turning round the Crystal Palace man before sending a sensational, curling effort into the far corner.