Man City Brush Aside Birmingham In FA Cup Third Round 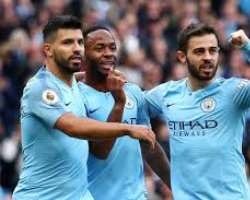 Manchester City strolled into the FA Cup fourth round as they wrapped up a 3-0 victory over Birmingham City in first half on Sunday.

City, winners of the tournament in 2018-19, scored all three goals within the first 33 minutes.

Pep Guardiola's side were ahead after just eight minutes thanks to a super strike from Bernardo Silva, who scored City's second on the quarter-hour mark as he finished off a brilliant team move.

Phil Foden scored City's third as he fired in from just outside the area after having been teed up from Riyad Mahrez.

The Algeria international thought he had netted a fourth for City on the hour mark, but saw his goal ruled out for offside.

Victory means City are still going strong in all four competitions, having reached the Carabao Cup final on Wednesday

"Our first objective is done," Guardiola said after the match. "Some young players were involved and we have qualified for the next round.

"If you follow the trajectory of our team since I arrived, we didn't drop one game.

"That's why we are in a fourth Carabao (League) Cup final in a row, FA Cup we won two seasons ago and a semifinal last season." (ESPN)