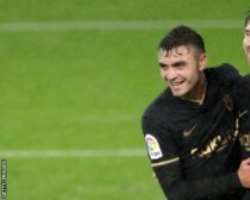 Twice in just over three weeks, Pedri has given Messi reason to smile after setting him up with spectacular assists. The versatile midfielder deftly rolled his boot over the ball to push it behind him to leave Messi free to score in Wednesday’s 3-2 win at Athletic Bilbao and in a 3-0 win at Valladolid on Dec. 22.

Talking about his assist at Bilbao, the 18-year-old Pedri said the connection with the 33-year-old Messi is working.

”It was a fast play where I could hear Leo speaking to me as he passed behind me. If he doesn’t say anything, I have no idea he is there,” Pedri said. ”He was all alone and fortunately the goalkeeper was out of position so he could just put it in.”

The embrace Messi gave Pedri after scoring has left many Barcelona fans hoping this is the beginning of a partnership that could help convince Messi to stay when his contract expires. Messi said in August that he wanted out after a title-less 2019-20 season. Last week, he said he won’t make a final decision until this season is over.

With five wins and two draws in its last seven matches, Barcelona is showing signs that it could still be a factor in this year’s Spanish league title race. Atletico Madrid is currently in the lead with Real Madrid in second place.

Barcelona visits Granada on Saturday after climbing to third place following the victory at San Mames Stadium in one of its best attacking performances since Ronald Koeman took over before the season.

Pedri will most likely be back in Koeman’s starting lineup for the visit to southern Spain, when it plays at a Granada team that is in seventh place after only losing once in eight matches at home this season.

Koeman has tinkered with his lineup all season looking for his ideal group. But the one constant has been Pedri, who Koeman has used in every midfield position and on both flanks of the attack. Pedri has played in 22 of 23 matches.

His dribbling, vision and passing skills in close spaces have made him the ideal playmaker that Barcelona has been searching for since the exits of Andres Iniesta and Xavi Hernandez.

Pedri’s goal from a header to even the score at 1-1 at Bilbao before he set up Messi was his third of the season.

Pedri is one of the few bright spots in an otherwise checkered record of signings by Barcelona in recent seasons. The club paid Las Palmas a reported 5 million euros ($6.1 million), plus possible add-ons, for the promising player in September 2019 with an agreement that he would remain at the Canary Islands’ club for one more season on loan. Koeman clearly favors him above both Philippe Coutinho, who injured a knee recently, and Antoine Griezmann despite their combined transfer cost of 280 million euros ($343 million).

Only Ansu Fati is younger than Pedri. The 18-year-old forward has greatly impressed since his breakout last season, but he is currently sidelined after undergoing surgery in November on a left knee injury.

Whether or not Pedri’s talent and understanding with his teammates could be a reason for Messi to remain is anyone’s guess. But Barcelona is improving, and Koeman has Pedri to thank for giving him some hope that the team could compete for titles.

”I am not surprised that (Pedri) is playing at a great level compared to the rest,” Koeman said. ”He has shown that he is mature beyond his years.”