NWFL: Ugochi Excited To Earn First Win Of The Season 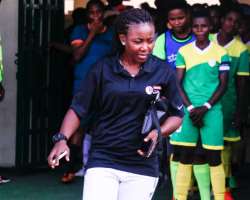 The Galacticas had lost their first three matches of the 2020/2021 NWFL Premiership Season and the onus was on the players to turn the poor start around with a victory in front of their teeming supporters.

Naomi Afemhike, Judith Nwaogu made their experience count with their first home appearances of the season.

Uduakabong Peter opened the scoring five minutes before halftime, before Anuoluwapo Salisu restored parity restored parity for the hosts on the stroke of half-time to end the first half 1-1.

Olamide Isiaka scored the second goal for the Galacticas, Blessing Akor made it 2-2 for the visitors from the spot.

Anuoluwapo Salisu further underlined her importance to the Pride Of Lagos by scoring the clincher with three minutes left to give the hosts the maximum points and subsequently, their first win of the season.

The Flamingo star has urged the team to build on the win in their subsequent matches.

"I am happy that we have finally won our first match this season after three losses, which for me were unfortunate, because we played well in those games.

"We want to win against Osun Babes in the next match"

DreamStar Ladies Coach, Anya Ugochi has hailed the players for playing to instructions and has also urged them to be consistent.

"We have been working very hard to get this win and to win in front of our fans to reward them for their constant support".

The Pride Of Lagos will be in NWFL action against Osun Babes on Wednesday, January 13 at the Osogbo Township Stadium.