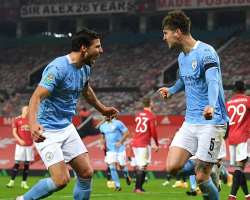 Pep Guardiola dedicated Manchester City's 2-0 win over Manchester United to reach a fourth consecutive League Cup final on Wednesday to the family of Colin Bell, a day after the City great died aged 74.

John Stones and Fernandinho were the unlikely goalscorers for Guardiola's men, who will face Jose Mourinho's Tottenham in the final at Wembley on 25 April.

Bell scored 152 goals in 492 appearances for City during a 13-year career in which he won five major trophies.

A minute's silence was held before kick-off with Bell's former teammate Mike Summerbee reduced to tears as he watched on from the stands.

"That's for him and his family. This person helps to build something for this club," said Guardiola.

"It is an incredible victory for us to beat United away and reach another final and, especially today, it is for him."

City now have the chance to equal Liverpool's record between 1981 and 1984 of winning four successive League Cups.

"I know the Carabao (League) Cup is not the Champions League but four times a row is incredible," added Guardiola. "I'm so impressed with the quality of this team."

'NOT ENOUGH' FROM UNITED
Mourinho was United boss the last time they lifted a trophy in 2017 and the Red Devils' wait for silverware under Ole Gunnar Solskjaer goes on as they lost a fourth semi-final in the past two seasons.

"It's not psychological, sometimes you meet good teams in the semis," said Solskjaer, whose side also lost to City at this stage of the competition last season.

"We met the best team in England and for me we didn't have enough today.

"But we're getting closer. This is a much better Manchester United compared to a year ago in those semis, that's positive but not enough." (Supersport)