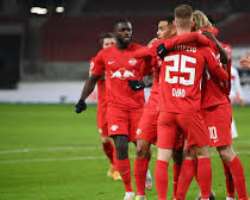 RB Leipzig dislodged Bayern Munich at the top of the Bundesliga table on Saturday as Dani Olmo's second-half goal was enough to seal a 1-0 win at Stuttgart.

"It was really good for me and the team to start the year with a win," Olmo told DAZN.

With European champions Bayern at home to strugglers Mainz on Sunday, Leipzig took the chance to go a point ahead as Olmo fired through the legs of Stuttgart goalkeeper Gregor Kobel.

Stuttgart's Swiss shot-stopper had earlier pulled off some heroics by using his foot to save a Emil Forsberg first-half penalty attempt.

With 23 minutes left, Spain midfielder Olmo finally got the breakthrough, finishing a move he started after Leipzig had moved the ball across the Stuttgart penalty area.

"The first half was good, the second was better - we were clearly the dominant team."

Earlier, Bayer Leverkusen blew the chance to take first place after stumbling to a 2-1 defeat at Eintracht Frankfurt which saw them drop to third as the league resumed after a two-week break.

"I have made my feelings clear in the dressing room," Leverkusen head coach Peter Bosz told Sky.

"We deserved to lose. Frankfurt had a better claim to the victory."

Leverkusen midfielder Nadiem Amiri scored with a deft back-heel flick to give the visitors the lead after only 10 minutes in Frankfurt.

However, Amin Younes equalised to make it 1-1 at halftime before Japan midfielder Daichi Kamada put in a cross which Leverkusen defender Edmond Tapsoba turned into his own net.