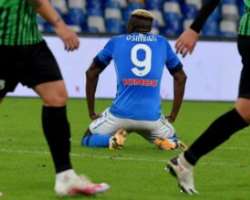 Osimhen faces club sanctions after images of him partying without wearing a mask were shared on social media.

But Gattuso said he also felt embarrassed for giving the 22-year-old permission to return to Africa.

“The responsibility of sending him to Nigeria was also mine. It’s embarrassing for the two of us,” Gattuso said after Sunday’s 4-1 Serie A win over Cagliari.

Osimhen apologised earlier on Sunday.
“I am sorry for what happened. I made a mistake going to Nigeria right now,” the forward said in an Instagram post.

“I made a mistake going to a surprise party without understanding the gravity of what I was doing.

“I apologise to the club, the coach, the team and the fans.”

According to Italian media, the images on social media were filmed in late December to mark Osimhen’s birthday.

“When I made a mistake, my teacher (Marcello) Lippi used to say he’d let me stew in my own juices for a while,” said former Italy World Cup winner Gattuso.

“The lad made a silly mistake, he knows he was wrong and has apologised.

“We are waiting for him because he is an important player for us.

“When we see each other I’ll tell him what I think. He made a mistake and he’ll pay what he needs to pay.”

Osimhen joined Napoli for a club record fee of up to 80 million euros ($94.6 million) last summer but has not played since November 8 because of a shoulder injury.