Ronaldo Confident Of Playing For Many More Years 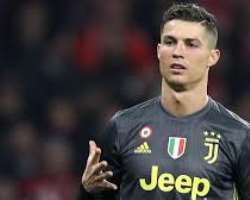 Juventus forward Cristiano Ronaldo has said he is confident of playing at the highest level for "many years" to come.

Ronaldo, 35, is one of the most successful footballers ever with his haul of five Ballon d'Or awards bettered only by Lionel Messi, while his tally of five Champions League titles is the most of any player in its present era.

Earlier this month, Ronaldo scored his 750th goal for club and country and said he is looking forward to extending his footballing career.

"It doesn't matter the age," he told BBC Sport. "What is important is the mind. "It doesn't matter if Cristiano Ronaldo is good, you don't know tomorrow what is going to happen. I live in the present, in the moment.

"The moment is good, I feel happy, I feel sharp and in a good moment in my life. I hope to play many, many years more but you never know.

My eyes see the future very, very bright, so I am happy with that."

Ronaldo continues to break records after he became the second male player to score 100 international goals in September.

The forward is hoping to lead his country into next year's Euros as Portugal seek to become the first nation to retain the trophy since Spain in 2012.

Ronaldo added that a "dream" triumph for Portugal "is possible" at the 2022 World Cup in Qatar -- he has never progressed past the semifinal stage in the tournament in his international career.

The Portugal captain also said that he has struggled to play without supporters in stadiums due to the coronavirus pandemic this year.

"I don't like to play in the stadiums without fans, it's like going to the circus but you don't see clowns," he added. "The pandemic has made people crazy.

"I hope soon they can open the gates of the stadiums. We have to live with that, we have to try to do a normal life but of course we have to respect the rules. But to play without the fans, I really don't like it." (ESPN)