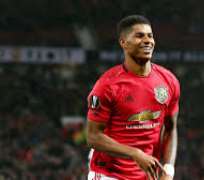 Manchester United would be "stupid" to look at the table and consider themselves title contenders with more than half the season still to play, Marcus Rashford said after Tuesday's 1-0 win over Wolverhampton Wanderers lifted them to second.

With the game at Old Trafford heading for a draw, the 23-year-old unleashed a left-footed shot that took a deflection off Romain Saiss and beat Rui Patricio in the third minute of stoppage time.

United, now nine games unbeaten in the league, climbed two places to second behind champions Liverpool with 30 points from 15 games but Rashford was reluctant to read too much into their position at this stage.

"We can't look too far ahead," he told Amazon Prime.

"We're a team that's still doing a lot of work on ourselves and to be looking at the table so early on in the season is a bit stupid of us.

"We have to take it one game at a time and if we can keep finding ways to win like this we'll see where we are at the end of the season."

"You can lose the chance of being in the race in the first 10 games of course, but play another 15 and get to 30 maybe, then we can start talking about it when we've at least played more than half the season," Solskjaer added.

"The belief is there, they think, 'we can win against anyone, anywhere'. This result is massive for the attitude."