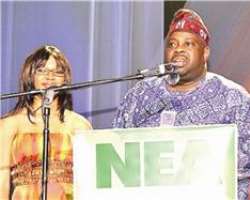 Coordinated in Nigeria by Events and Entertainment Consult, owned by entertainment businessman, Wale Oluwaleimu, the awards ceremony, considered to be a big entertainment event on the shores of America and among the Nigeria community, has been lending credence to the re-branding Nigerian initiative.

Popularly referred to as NEA, the awards are presented annually by NEA producers in the United States for outstanding achievements in Nigerian music, film, TV, comedy, fashion and radio. Preparations are already in top gears for this year's edition.

Scheduled to hold at the BMCC Tribeca Performing Art Centre, New York City, Saturday, September 18, 2010, top Nigerians stars have been gearing up towards getting some of the most desired awards.

According to organisers of the event, the venue of the awards ceremony is expected to be jam-packed with top acts from Nigeria and in the Diaspora. Nigerian entertainers in countries like United Kingdom, Germany, France, Ireland, Canada, Nigeria and South Africa are expected to shine and attend the event expected to kick off by 5:30 p.m., American time.

It is also gathered that the event has been dedicated to promoting the image and rich culture of Nigeria in the continent and to the international scene since its birth.

“We are dedicated to promoting the image and rich culture of Nigeria in the continent and to the international scene. This dedication has increased the awareness of this new edgy style of African Entertainment and has helped promote Nigerian acts to the world,” Oluwaleimu hinted.

Incidentally, submission of materials for the NEA 2010 ended on Friday, June 4, with the Nigerian entertainers dropping off their materials at the designated Lagos and US offices.

Artistes are required to drop 10 CDs/DVDs of their works, which would be screened for nomination expected to be out soon.

According to Oluwaleimu, “We are not trying to be braggadocios about this but Nigerians should get ready for the biggest entertainment event. This year NEA will be different from the previous ones in terms of packaging and execution.”

This might not be unconnected with two major happenings in the history of Nigeria as a country and its entertainment industry.

It is believed that the country's golden jubilee anniversary, which would take place just few weeks after the awards ceremony and the loss of late rapper, DaGrin, would be some of the highpoints of the event even though the organisers have not made this public.

Going by established trends, outstanding achievements in Nigerian music, film, TV, comedy, fashion and radio would be rewarded in the 29 different categories.

The producers also noted that the inclusion of these categories is to recognise the other thriving segments of Nigerian entertainment.

Past winners like D'Banj, JD7 Couture, J Martins, 9ice, Funke Akindele, Jim Iyke, I Go Dye, DJ Neptunes, Iceberg Slim, Dapo Torimiro, Darey Alade, M.I., ID Cabasa and Midnight Crew have yearly yearned to be part of every edition of the award ceremony, which in large measure has contributed to the immense growth of the country's entertainment industry.

These entertainers have been thronging the Ikeja office of Events and Entertainment, the submission port for Lagos, to submit their works in order to get nominations at this year's edition of the awards ceremony.

As artistes like 9ice, 2Face, D'Banj and M.I. had shone at the awards, picking more than two awards a night, other Nigerian acts like Iceberg Slim and Amplified Crew have been shown to the Nigerian public as some of their own doing good in the United States of America.

Meanwhile, the events had been held in places like the auditorium of the Crampton's University, the Shrine Auditorium and now the Tribeca, New York. Top acts that have at one time performed at the event included Eldee, Rooftop MC, Bouqui, Bigiano and YQ.

Though performers and nominees for this year's edition have been rolled out, the awards ceremony is fast gaining momentum as the producers are already at work.

Rave entertainers like Wande Coal, Stephanie Okereke, Ini Edo, Ramsey Nouah, Kunle Afolayan, Terry G, General Pype, Basketmouth, Julius Agwu, Seyilaw, AY, Jaywon, Kas and Klever J, who have been getting awards for their brilliance this year are being touted to be part of this year's edition though the nominees list is yet to be released.

While several Nigerians and non-Nigerians troop in yearly to attend the event, which has held in several places in America, it is certain that this year's edition would also involve several celebrities from all walks of life and top Nigerian entertainers and celebrities alike.

What also seems to have helped the awards ceremony grow and attain the height, which it has been able to achieve within the few years of berth, is the acceptance it has gotten from Nigerian entertainers and Nigerians all over the world. Also, the choice of America as the host country seems to be the icing on the cake for the organisers of the awards ceremony.