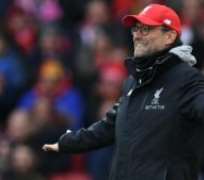 Nicholas Mendola, NBC Sports
One of these days, Jurgen Klopp might explode.
The Liverpool boss was in a touchy mood after his Reds failed to find a second finish and conceded an equalizer to lowly West Bromwich Albion to see their perfect home season sullied in a 1-1 draw at Anfield on Sunday.

The Reds lost more than two points, as Joel Matip limped off the field with what Klopp called an adductor injury.

Klopp was frustrated by West Brom packing it in, calling their first-half formation a 6-4-0.

“I don't think that anybody can expect [an opponent] playing like West Brom plays in the first half tonight, 6-4 or whatever it was,” he said. “We did okay. Scored a goal and didn't give anything away. Second half we didn't do exactly the same again. [Early] We gave like three counterattacks. Easy, simple corners, too many. It was the only thing they wanted to have and we gave it to them.”

Klopp went on to say that a lot of factors conspire to have a team not at its best, citing schedule congestion and muscle injuries. He's been very vocal about the Premier League not allowing five subs per team like other top European leagues. STREAM LIVERPOOL – WEST BROM FULL MATCH REPLAY

And Liverpool also had to deal with a team playing for a new boss. Klopp says they couldn't plan for Allardyce's Baggies. That feels a bit silly given there are decades of tapes worth of Big Sam matches but away we go…

“[Against] Aston Villa, Sam was 3 or 4 days in charge,” Klopp said. “You use it but he has a week to prepare the game. They played different. Today it was clear. It was defensive and go for set pieces. In the first half we had really good situations, and that's how you should do it but second half we didn't have it. We played around, crossed the ball, instead of moving. It's not a game we will talk about in 20 years.”

Liverpool stays atop the Premier League table by two points above Everton. The Reds next head north to face struggling Newcastle before going south to Southampton.