Ndidi Has Brought Strength Back To Leicester City - Sherwood 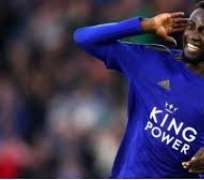 Tim Sherwood has hailed Wilfred Ndidi for adding strength to the Leicester City team since he made a return from a groin injury.

Ndidi returned from a long-term injury to help Leicester to impressive wins over Tottenham and Sheffield United including four victories in their last five matches.

“They have got Ndidi back, I think he’s given them an injection of energy which they have been missing in that midfield area, to supplement Tielemans and Dennis Praet,” Sherwood told Premier League Production.

“Maddison’s come back to life because they’ve got their energy in the midfield area and if Manchester United fullbacks leave, Vardy would be sprinting in there, he would be hurting them and stretching them down the sides.”

Leicester City have a date with Manchester United on Boxing Day at the King Power Stadium.

Ndidi made 32 appearances for Leicester City last season as the Foxes qualified for Europa League.

He has been consistent in the Premier League since moving to Leicester City in 2017 from Genk.

Ndidi was part of the Super Eagles squad that won Bronze at the 2019 Africa Cup Of Nations in Egypt.