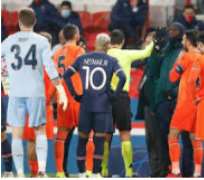 Uefa has opened a disciplinary proceeding into Tuesday's Champions League match between Paris St Germain and Istanbul Basaksehir when players walked off in protest at after the Turkish club accused a match official of racism.

European football's governing body said on Wednesday that it had appointed an Ethics and Disciplinary Inspector to "conduct a disciplinary investigation regarding the incident".

A disciplinary investigation can result in sanctions and match officials are covered by Uefa's disciplinary regulations which are regularly used to punish clubs and players.

The incident was sparked when Basaksehir's assistant coach Pierre Webo was shown a red card for protesting against a refereeing decision and the Turkish side then alleged that the Romanian fourth official Sebastian Coltescu used a racist term towards the Cameroonian.

The players from both teams left the field after about 10 minutes of discussions with Romanian referee Ovidiu Hategan, a first in European football. The game, which was suspended after 13 minutes, will be completed on Wednesday at 1755 GMT with new match officials.

"Why he say negro?", Basaksehir substitute Demba Ba repeatedly asked match referee Hategan as confusion reigned on the touchline in the Group H match. The Romanian word for black is "negru".

"The Romanian Football Federation sets itself firmly apart from any action or statement of a racist or xenophobic nature,” the federation (FRF) said in a statement adding it was waiting for the Uefa report "to know exactly what happened and to act accordingly."

Reuters approached the FRF for comment from the officials but did not receive an immediate response.

"Racism, and discrimination in all its forms, has no place within football," the governing body said in a statement.

'PLAYERS ARE FED UP'
Romanian Sports Minister Ionut Stroe apologised for the incident.

"We firmly condemn any statement that could be considered racist or discriminatory," Stroe told television station Digi24.

"The Uefa investigation will tell us what really happened and then measures will be taken. I don't think this will lead to a diplomatic scandal, we all condemn such an incident. Such unfortunate language will be sanctioned.

"I wish the language use were inoffensive or neutral, but we must not tolerate such behaviour. We will have talks about how we can repair this situation," he added.

Piara Powar, executive director of the anti-racism monitoring and campaigning group Fare said: “This incident shows the need for much better training of match officials. Unintentional racism is still racism. If officials cannot set the standards by their own behaviour they cannot be relied on to deal with racism on the pitch or in the stands."

Powar said the walk-off showed the mood among players in relation to racism issues.

"The walk off by both Basaksehir and PSG together lays down a marker in Europe. Many players are fed up with half measures to tackle racism and are more prepared than ever before to exercise their right to stop a match," he added.

"I would like to salute the attitude of the two teams who took a strong and exemplary decision in leaving the field. These unacceptable incidents have no place in a stadium," he said. (Reuters)