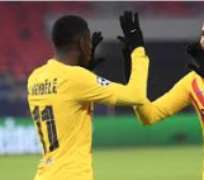 Barcelona are favourites to finish top of Group G as they maintained their 100% start to the Champions League with a comfortable win at Ferencvaros.

The Catalan giants will ensure they win the group with a point against Juventus next week.

Coach Ronald Koeman made five changes to the XI that started in Sunday's win over Osasuna, which included resting Lionel Messi.

However, the 33-year-old's influential presence was not missed as Barca all but sealed victory by scoring three goals in the first 28 minutes.

Antoine Griezmann gave the visitors the lead with a deft backheel after fellow Frenchman Ousmane Dembele and Spanish left-back Jordi Alba had pierced the defence with good combination play on the left.

Dembele rampaged down the wing again for the second goal, delivering a low cross for Denmark forward Martin Braithwaite to poke in his fourth goal in the past three matches.

The French winger then added the third goal from the spot after Braithwaite had been fouled in the area by Abraham Frimpong.

"We played very well, we scored some great goals and I'm very happy with how we played, especially in the first half," said Barca boss Koeman.

"You can see that we have a great squad as we were able to rest various players and the ones who played today showed that there's a lot of competition, particularly in attack." (BBC)