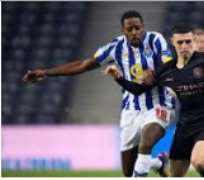 Pep Guardiola saluted Manchester City's "incredible personality" after they sealed first place in Champions League Group C with a 0-0 draw against Porto that also sent the hosts in the last 16 on Tuesday.

Sergio Conceicao's side were on the defensive for long periods at the Estadio do Dragao, but a series of superb saves from Porto keeper Agustin Marchesin secured the point they needed to advance.

City's Gabriel Jesus was denied a late winner after VAR ruled out his goal.

Guardiola's team had already booked their place in the last 16 after winning their first four games and, with top spot now secured, the boss can now rest players for their final match against Marseille next week.

"Congratulations to my team for this game and finishing first. We didn't concede a shot on target or a corner all game," Guardiola said.

"We struggled to score but we played really well with incredible personality and many things about the game were brilliant.

"It's difficult with eight or nine of their players defending in the box.

"We came here to finish first. We played for the win and we deserved it, but deserve in football is a fake word because the result dictates everything."

Guardiola insists City will thrive in the Champions League this season as they bid to make amends for last term's shock quarterfinal defeat against Lyon.

City have never won the Champions League and Guardiola, who last lifted the trophy with Barcelona in 2011, has been unable to take them past the quarterfinals.

Finishing on top of the group was the first step towards that target and Guardiola will be encouraged by City's improved defence.

They have conceded just six goals in their last 13 games in all competitions, a run that includes four successive Champions League clean sheets.

"It's more than the results. We played really well in all the games. Eleven shots on target against Olympiakos and against Marseille as well and today we had lots of chances," Guardiola said.

"The way we played, the courage, and defensively we were so good." (Supersport)