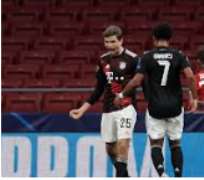 Atletico Madrid must wait to secure a place in the last 16 of the Champions League after substitute Thomas Mueller scored a late penalty for a much-changed Bayern Munich in Tuesday's 1-1 draw in Spain.

Joao Felix put Atletico ahead in the first half before Mueller won and converted a spot-kick four minutes from time as Bayern Munich's record 15-match winning run in the competition came to an end.

Diego Simeone's Atletico had won just once in four matches in Europe this term despite their strong start in LaLiga, but knew victory would secure passage to the knockout phase after Lokomotiv Moscow's 3-1 home loss to Salzburg.

Instead, the 2014 and 2016 finalists must avoid defeat away to the Austrian champions next week to advance.

"We played very well individually and collectively, but are frustrated by not getting the victory to put us in the last 16," Felix told Movistar Plus.

"We were winning until the 85th minute and we had more chances than they did but didn't take them. They only had a few but it was enough for the draw."

For Bayern, whose focus was primarily on Saturday's Bundesliga showdown with RB Leipzig, it marked just the fourth time in 43 matches this year they failed to win.

"I'm very happy with the result. We were more competitive in the second half to get the draw. With Mueller, we gained a bit more dynamism up front. On the whole, it was a satisfactory match," said Bayern coach Hansi Flick.

Luis Suarez was again unavailable at the Wanda Metropolitano having tested positive for Covid-19 while Diego Costa is sidelined long-term after suffering a blood clot in his right leg.

Alexander Nubel replaced the rested Manuel Neuer in goal as Flick left several regulars, including Robert Lewandowski, behind in Germany with top spot in Group A already assured.

Bright Arrey-Mbi, a former Chelsea academy player, made his senior debut in Bayern's central defence while fellow 17-year-old Jamal Musiala was handed a start in attack behind Eric Maxim Choupo-Moting.

Thrashed 4-0 in Munich in October, Atletico took the lead here on 26 minutes as Portugal international Felix swept in a low cross from Marcos Llorente. (Supersport)