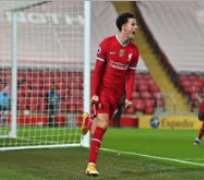 Jurgen Klopp hailed a depleted Liverpool's 1-0 win over Ajax to reach the last 16 as one of his greatest Champions League nights given the circumstances of a lengthy injury list.

The Reds' youngsters took their chance to shine as 19-year-old Curtis Jones scored the only goal, while Caoimhin Kelleher kept a clean sheet against the Dutch giants on his European debut.

Victory also ensures Klopp's men win Group D with a game to spare, allowing the German to give some of his stars a much-needed rest away to Midtjylland next week.

"Honestly, since I am (at) Liverpool, for how it feels, one of the biggest Champions League nights," said Klopp, who has guided Liverpool to two finals and won the competition in 2019.

"Without supporters in, it was the most important, the most difficult and the most exceptional game."

Kelleher had to deputise for Alisson Becker, who added to Klopp's long injury list before kick-off, while Andrew Robertson needed heavy strapping applied to his ankle in the first half.

"There are not a lot of reasons to smile because of the injuries it's tricky. Then the boys throw themselves into that game," added Klopp.

Jones has been one of the beneficiaries of those absentees with many more first-team minutes this season and came closest to breaking the deadlock before halftime when his curling effort came back off the post after just six minutes.

The midfielder was then alive to score the winner just before the hour mark when a lofted cross from Neco Williams appeared easy pickings for Ajax 'keeper Andre Onana, but he instead tried to let the ball go behind for a goal kick and was caught out when Jones sneaked in at the back post to turn the ball into an unguarded net.

"That's how it is sometimes, in situations where there are problems there is always an opportunity for someone else and he took it just exceptionally well," added Klopp.

Ajax had been unbeaten in eight games since losing to at home to Liverpool in October, but they could not find a way past the inspired Kelleher. (Reuters)