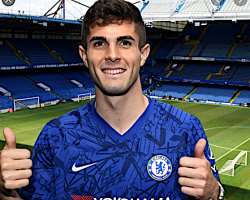 Christian Pulisic is fit and ready to play for Chelsea again, he is expected to be part of the team for the clash against Tottenham.

The young star sustained a hamstring injury in the build-up to the match against Burnley.

Pulisic played a vital role for Chelsea last season churning out impressive performances as the team finished fourth in the Premier League.

“He’s fit. Ready to start is a question mark, it’s hard to gauge match-fitness. In the training times as they are with COVID, it’s very hard to recreate match-playing training. We don’t have any academy games that we can mix bubbles.” The former Chelsea player said

Chelsea have won their last six matches in all competitions and they will be hoping to send a title statement with a victory against Tottenham.

The Blues defeated their North London rivals home and away last season.