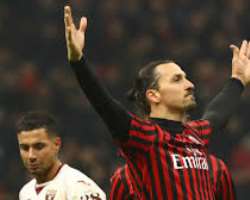 Zlatan Ibrahimovic scored twice to bring his tally to 10 league goals this season before limping off with a muscle strain as AC Milan stayed top in Serie A on Sunday with a 3-1 win at 10-man Napoli.

Milan move back two points ahead of Sassuolo -- 2-0 winners earlier at Hellas Verona -- with Roma third after Henrikh Mkhitaryan netted a brace in a dominant 3-0 win over Parma.

"For me Zlatan is stronger now than 10-12 years ago," said Napoli coach Gennaro Gattuso of his former Milan teammate.

"Milan strongly believes in Ibra, his teammates trust him 100 per cent.

"In my opinion, their team is not the strongest but they have the mentality.

"We play well but lose as soon as it gets difficult."

Ibrahimovic continued his fine form, heading in a Theo Hernandez cross after 20 minutes, sending in the second with his knee nine minutes after the break.

But the 39-year-old pulled up clutching his left hamstring and was substituted after 79 minutes.

The Swede has scored in all six games he has played this season, having missed two after contracting coronavirus.

Coach Stefano Pioli missed the trip south with Covid-19, but his side got their first league win in Naples since October 2010, the season they last won the Scudetto, with Ibrahimovic also on the scoresheet that time.

Napoli played the final half an hour a man down after Tiemoue Bakayoko was sent off for two yellow cards, just after Dries Mertens had pulled a goal back for the hosts.

Norwegian Jens Petter Hauge completed the scoring five minutes into injury time, the 21-year-old getting his first Serie A goal.

Champions Juventus are fourth -- four points off top spot -- after winning 2-0 at Cagliari on Saturday.

Last season's runners-up Inter Milan are just behind in fifth, after a Romelu Lukaku double inspired a 4-2 comeback win over Torino, with Napoli dropping from third to sixth -- six points off top spot. (AFP)