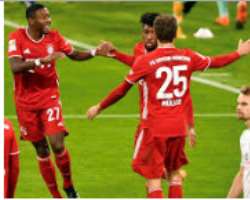 Bayern Munich stayed top of the Bundesliga table despite being held to a 1-1 draw at home to Werder Bremen.

Maxi Eggestein gave Werder the lead shortly before half-time with a smart first-time finish into the corner from inside the area.

Bayer Leverkusen moved up to second and within a point of leaders Bayern after a 2-1 win at Arminia Bielefeld.

A superb double save from Manuel Neuer denied Werder an opener midway through the first half, with the Germany international denying Josh Sargent and Ludwig Augustinsson in quick succession.

Sargent was then involved in the opening goal in first-half stoppage time, with his smart turn and cross from the right converted by Eggestein.

Bayern dominated much of the second half as they pushed for an equaliser, with Douglas Costa hitting the underside of the crossbar with a deflected long-range effort within seconds of the restart.

After Coman had levelled the scores, Eric Maxim Choupo-Moting had Bayern's best chance to win the game late on, but he blazed over from five yards from Leroy Sane's cross.

Werder had spent much of the second half on the back foot yet could have snatched a late winner on the counter-attack, with Sargent's effort from just inside the area well saved by the excellent Neuer.(BBC)