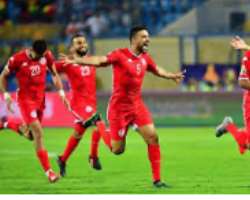 The Africa Cup of Nations qualifiers wrapped up for the week on Tuesday, with Mali and Tunisia joining hosts Cameroon as well as Algeria and Senegal as teams which have booked early tickets for the 2022 finals.

Mali and Tunisia both sealed their berths in the two night clashes, with the Eagles triumphing 2-1 in Windhoek – thanks to goals from Sekou Koita and Moussa Doumbia – to move to the head of Group A, while Tunisia’s 1-1 draw in Dar Es Salaam against Tanzania strengthened their grip on top spot in Group J.

The early evening games featured key wins for North African giants Egypt and Morocco. The Pharaohs defeated Togo 3-1 in Lome – with goals from Mohamed Magdi, Mohamed Sherif and Mahmoud Trezeguet – to draw level with Comoros at the top of Group G, while the Atlas Lions are within touching distance of qualification at the head of Group E after a Hakim Ziyech-inspired 2-0 win over the Central African Republic.

Nigeria could have booked an early ticket for the final had they beaten Sierra Leone in Freetown but only managed a 0-0 draw against their Group L rivals, while DR Congo brought themselves right back into contention in Group D: Neeskens Kebano netted the only goal in their clash with Angola in Luanda to see the Leopards just one point behind the co-leaders, Gambia and Gabon.

The afternoon matches were headlined by a 1-0 win for Sudan over heavyweights Ghana in Omdurman. The Falcons of Jediane are very much back in the running in Group C thanks to an injury-time strike from Mohamed Abdelrahman.

The Black Stars needed only a draw to secure early qualification, but instead sit atop the standings level with South Africa and only three points ahead of Sudan.

In Group K, just one point separates the top three teams after co-leaders Ivory Coast and Madagascar drew 1-1 in Toamasina, allowing Ethiopia to close in from third place thanks to a 3-0 home win over Niger in Bahir Dar, featuring goals from Amanuel Gebremichael, Mohamed Mesud and Getaneh Kebede.

In Group L, Lesotho did Nigeria a favour by holding Benin 0-0 in Maseru, while Group K’s result – a 0-0 draw between Rwanda and Cape Verde in Kigali – means the race to join leaders and tournament hosts Cameroon in qualification remains wide open.

The Afcon qualifiers are set to conclude in March 2021 with matchdays five and six of the group stage. No less than 19 places in the tournament finals remain up for grabs.