Osimhen Out Of Sierra Leone Second Leg, Returns To Napoli 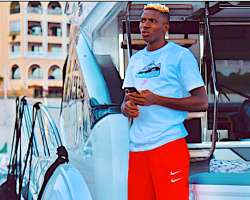 Super Eagles striker, Victor Osimhen has been ruled out of the Afcon second leg qualifiers clash against the Leone Stars of Sierra Leone in Freetown on Tuesday.

The Napoli striker sustained a shoulder injury in the first leg in Benin on Friday before the Super Eagles capitulated to draw 4-4.

The 21-year-old travelled to Italy on Sunday morning for further assessment and he will be out of the second leg.

He has now scored four goals and recorded two assists in three appearances in the qualifiers.

Similarly, Emmanuel Dennis has also been ruled out of the game with a knee injury.

The battle to replace Osimhen is between Kelechi Iheanacho and Paul Onuachu.

The Super Eagles will jet out of Benin on Monday for the return leg in Freetown on Tuesday.