Champions League: Jesus Back With A Bang For Manchester City 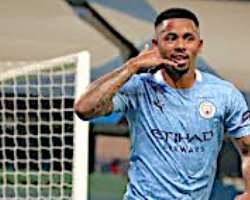 Gabriel Jesus marked his return from injury with a blistering strike to seal Manchester City's 3-0 win over Olympiakos as Pep Guardiola's men cruised towards a place in the last 16 of the Champions League.

City have maximum points from their opening three games in group C, thanks in large part to Ferran Torres' free-scoring form as the Spaniard became the third-youngest player to ever score in four straight Champions League games when he opened the scoring on 12 minutes.

However, the English side have lacked a ruthless streak in the recent weeks in the Premier League without a natural striker and Jesus' return comes at just the right time ahead of Liverpool's visit to the Etihad on Sunday.

The Brazilian was introduced for the final quarter to boost his match fitness and took just 11 minutes to thrash the ball high past Jose Sa to double City's advantage.

Joao Cancelo then rounded off the scoring in the final minute.

Guardiola's wish for a hassle-free passage through the group given the gruelling schedule his side face in the coming months looks set to be granted with a point in Greece in three weeks' time enough to book their place in the knockout stage with two games to spare.

Kevin De Bruyne wasted a huge early chance to open the scoring when Olympiakos were caught out by the City press.

But within seconds the Belgium made amends with a sumptuous one-two that sent Torres clear to slot home his fourth goal since signing from Valencia in August.

Guardiola was able to make five changes from Saturday's 1-0 win over Sheffield United with one eye on the clash with Liverpool.

First-choice centre-backs Aymeric Laporte and Ruben Dias were among those rested, but the City defence was not tested until Olympiakos drastically changed their approach in the second half.

Phil Foden breathed a sigh of relief after he gifted Mathieu Valbuena a huge chance to equalise only for the former French international to slice wide.

Youssef El-Arabi finally forced Ederson into a save before Guardiola reacted with the introduction of Rodrigo and Jesus.

City immediately started to move the ball with more urgency after the changes and De Bruyne twice should have done better with clear shooting opportunities from the edge of the box.

The City captain was again the creator for his side's second goal, though, as Jesus made space for the shot inside the box and blasted into the roof of the net.

And it was another of the substitutes who scored City's third as Cancelo stormed forward from right-back before curling into the bottom corner on his weaker left foot. (AFP)