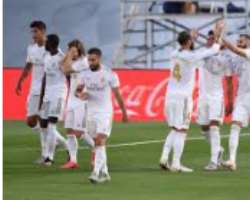 Real Madrid thwarted a second half comeback from Inter Milan to win 3-2 on Tuesday and give their Champions League bid lift-off in Group B.

Madrid's 19-year-old Brazilian Rodrygo came off the bench to score the winner at the empty Alfredo di Stefano stadium, where Inter threatened a remarkable turnaround after drawing level from two goals down.

Lautaro Martinez and Ivan Perisic gave Inter hope of victory after Karim Benzema and Sergio Ramos had put Madrid in command, Ramos heading in a second after half an hour for his 100th Real Madrid goal.

But Rodrygo had the last word, his cool finish in the 80th minute earning Zinedine Zidane's side their first win to leave Inter with a mountain to climb if they are to make the last 16.

"It's three very important points for us," said Zidane. "We had to win and we did it with character, after suffering against a very good opponent. It wasn't easy."

These teams were expected to fight for the top two spots in the group but both came into this game on the back of stumbling starts, Inter taking two points and Madrid just one from opening games against Borussia Moenchengladbach and Shakhtar Donetsk.

Neither coach could afford another slip-up either after a bumpy few weeks. Antonio Conte's Inter have now won only one of their last seven games while Madrid appear to have turned a corner following consecutive losses last month.

"We have to keep our heads up and continue to work," said Martinez. "We are only missing some small details to win these kind of games.

"We know how difficult this competition is. We play well but always make some mistakes. You simply cannot afford that at this level."

"Real have players with a lot of experience," added Conte. "They know when to finish the game. We are missing a bit of that." (Reuters)