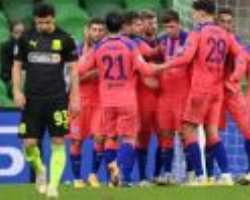 Hakim Ziyech scored his first Chelsea goal as Frank Lampard's side picked up three points in an emphatic Champions League win in Russia.

Ziyech, 27, swept in on his first start for the club to add to goals from Callum Hudson-Odoi, Timo Werner and Christian Pulisic as Chelsea returned to goalscoring ways in style.

Back-to-back goalless draws had signalled that Lampard had made strides in sorting out his side's defence, and while they will face tougher opposition than Russian new boys Krasnodar, the manager will be delighted that his attacking riches also kicked into gear after midfielder Jorginho had missed an early penalty.

Four points from two games is a solid start to their Champions League campaign and despite their run of draws Chelsea have now lost just once in 10 games this term.

Lampard has undertaken a rebuild of his side and could field around £160m of new attacking talent as Ziyech joined Werner and Kai Havertz in the starting XI.

But, initially at least, the visitors were still guilty of moving the ball too slowly against some spirited and organised opponents.

Werner was lively if underused, and won the early penalty when he was tripped by Kaio. Jorginho stuck with his usual skipping technique, sent goalkeeper Matvey Safonov the wrong way, but hit the base of the post.

Chelsea needed a helping hand to end their 248-minute goal drought and duly got one from Safonov when the 21-year-old goalkeeper made a total hash of dealing with Hudson-Odoi's scuffed shot, the ball bobbling in.

Lampard's side were always comfortable but had to endure a sticky spell when Yuri Gazinsky hit the crossbar from a corner. A second penalty, harshly given for handball, was then thrashed home by Werner to shut down any signs of a fightback.

Ziyech, who showed encouraging signs throughout and who should have scored earlier after a great turn, found the bottom corner after good approach play from substitute Pulisic, and the American made it four in the last minute when he drove past Safonov.

Tammy Abraham's assist for the fourth, and the fact Olivier Giroud remained on the bench, only served to underline the fact that goals should not be an issue for this Chelsea team. (BBC)