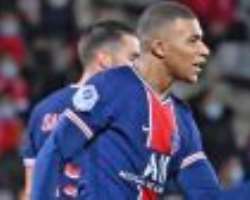 PSG were not at their best but went ahead in the second half when Kean, on loan from the Toffees, headed in.

Neymar had gone off midway through the first half after appearing to pull a muscle.

Kean then got his second with a fine finish on the turn inside the box.

The result was a little harsh on the hard-working hosts, who had the better chances before Kean first struck.

Shortly before PSG's goal, Edin Visca had forced a good save out of goalkeeper Keylor Navas after capitalising on a defensive error.

Navas made another good save to prevent the hosts from equalising, batting away Deniz Turuc's stinging half-volley on the run.

Neymar went off in the 26th minute
Prior to scoring, PSG's best chance had been a Kylian Mbappe effort, which he lashed wide from a promising position.

But Kean took centre stage in the second half as he took his tally to four goals in four games since joining PSG from Everton on 4 October.

The win was PSG's first in this year's Champions League after they lost their Group H opener to Manchester United last week. (BBC)