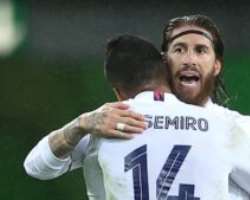 Marcus Thuram converted the hosts’ first chance of the game in the 33rd minute and tapped in on the rebound in the 58th minute to leave Real staring at two defeats out of two in their 2020/21 campaign.

But Karim Benzema cut the deficit in the 87th minute with an overhead kick and Casemiro got the equaliser in stoppage time, after Sergio Ramos’ header fell kindly.

The 13-time European champions had lost their previous three games in the competition following last season’s losses to Manchester City in the knockout stage and then their shock 3-2 defeat to Shakhtar Donetsk last week.

Zinedine Zidane had been hoping to see his side carry over momentum from their 3-1 weekend win over Barcelona in La Liga but chances were few and far between and the heavyweights had to settle for saving face.Advertisement Bayern battle to stretch winning run Image:Joshua Kimmich is congratulated by his Bayern team-mates after scoring the winner against Lokomotiv Moscow

Joshua Kimmich volleyed a 79th-minute winner as Bayern Munich battled past Lokomotiv Moscow 2-1 in their Champions League Group A match to extend their winning run in the competition to 13 games.

Leon Goretzka headed Bayern in front in the 13th minute but they squandered a string of chances to double their lead and also hit the post before Anton Miranchuk punished their wastefulness following a quick break from Ze Luis. Also See:

Bayern, winners of five trophies in 2020, are top of their group on six points, after thrashing Atletico Madrid 4-0 last week in their opener.

The Russians, who have one point, had the first good chance through Fyodor Smolov’s third-minute header but Bayern’s Goretzka did better, heading in a perfect Benjamin Pavard cross.

Kingsley Coman then struck the foot of the post 10 minutes later after an identical assist from Pavard with the Russians clearly struggling with Bayern’s pace down the wings.

Kimmich should have done better when he fired at a defender from two metres out early in the second half but the midfielder then made amends 11 minutes from the end.

With Lokomotiv pressing for a second goal, he picked up the ball on the edge of the box and with his back to the goal, flicked it up, pivoted and volleyed in the winner. Liverpool toil – but Man City cruise

An injury to Fabinho overshadowed Liverpool’s unconvincing 2-0 Champions League win over Midtjylland with Diogo Jota and Mohamed Salah on target.

Jota fired into an empty net from the Reds’ best move of the game, to score the club’s 10,000th goal in history, 10 minutes after half-time when man of the match Trent Alexander-Arnold teed up the Portuguese forward for a tap-in.

That would prove their only shot on target until injury-time, but Liverpool had already been made to sweat before half-time when Fabinho was forced off with what appeared an injury to his hamstring , leaving Rhys Williams the only senior defender able to replace him with half an hour played.

Jurgen Klopp’s disjointed side had left Roberto Firmino, Salah and Sadio Mane on the bench but even the introduction of the latter pair with an hour played made little improvement to their attacking play.

Liverpool were nearly made to pay when substitute Evander fired just wide before Anders Dreyer went even closer late on, but the hosts added some gloss to a poor performance when Salah converted a penalty he won in injury time to keep up their perfect start to their Group D campaign.

But Manchester City maintained their 100 per cent start to their Champions League campaign with a dominant 3-0 win at Marseille.

Summer-signing Ferran Torres gave City the lead from close range after some slack Marseille passing (18), before Oleksandr Zinchenko hit the outside of the post with a low effort.

Marseille waited to up the ante in the second half, but City doubled their lead before the hosts could truly threaten, as Ilkay Gundogan swept home from 10 yards following Raheem Sterling’s header across goal (76).

Inter Milan missed a string of chances against Shakhtar Donetsk as the two sides played out a 0-0 draw in their Champions League Group B match.

Inter drubbed Shakhtar 5-0 in last season’s Europa League semi-final in August but the Ukrainian champions proved to be a tougher proposition this time as their goalkeeper Anatolii Trubin shone at the Olympic stadium in Kiev.

The Italians twice hit the crossbar in the opening half, with Romelu Lukaku seeing his thundering free-kick tipped on to the woodwork by Trubin, who got the nod from manager Luis Castro ahead of stalwart Andriy Pyatov.

The visitors then missed a gilt-edged chance in the 54th minute as Trubin parried a Marcelo Brozovic shot and Lautaro Martinez scuffed the rebound wide with the goal at his mercy.

Inter launched further waves of attacks in the final 15 minutes but Shakhtar held firm as their back four made several desperate clearances to keep a clean sheet. Joao Felix stars as Atletico survive scare

Joao Felix scored twice for Atletico Madrid as they survived a scare to complete a 3-2 Group A victory over Red Bull Salzburg and kick-start their European campaign at the Wanda Metropolitano stadium.

Marcos Llorente had put Atletico ahead in the first half, only for goals from Dominik Szoboszlai and Mergim Berisha to swing the fixture in the favour of the visitors early in the second half.

But the excellent Felix – whose audacious over-head kick inside 15 minutes crashed off the crossbar – tapped in the equaliser, before lashing in the winner with five minutes to play as the Salzburg defence stood static following a low cross into the box. Atalanta hit back, Porto claim win

The Colombian international’s double came after defensive lapses had allowed the Dutch to go 2-0 ahead at the interval with captain Dusan Tadic scoring a penalty and teenager Lassina Traore adding a second eight minutes later.

Fabio Vieira scored an early goal as Porto as they beat Olympiakos 2-0 in their Champions League Group C clash at the Estadio do Dragao.

The hosts went ahead on 11 minutes after Olympiakos captain Andreas Bouchalakis misplaced a pass and 20-year-old Vieira provided the finishing touch for his first Champions League goal.

Sergio Oliveira made the points safe with a second goal for Porto five minutes from time as he converted Moussa Maregas cross. Win £250,000 for free!Do not miss your chance to land the £250,000 in this weekend’s Super 6 round. Play for free, entries by 3pm.