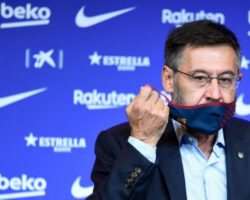 Under-pressure Barcelona president Josep Maria Bartomeu suggested Monday that “now would be the worst time” to leave his post.

Bartomeu faces a vote of no confidence after turbulent times at the Camp Nou, not least the stand off with club legend Lionel Messi who was blocked from leaving this summer.

Speaking after a board meeting Bartomeu said: “There are lots of issues. I believe that it would be the worst time to leave Barca to an interim management board”.

A caretaker board would assume control until new elections should Bartomeu stand down.

A petition against him passed the required 16,250 signatures last month.

In the referendum which Bartomeu wants to be held on November 15/16, his opponents will need two thirds of the votes cast to remove him.

Presidential elections would likely be held in January or February, slightly ahead of the scheduled date in March. Bartomeu is not running.

His departure could affect the future of Messi, who explained in September how the way the club is run had been a key reason for his attempt to leave.

Victor Font is one of the leading candidates to succeed Bartomeu and has linked his campaign to the arrival of Messi’s former teammate Xavi Hernandez as coach, although Font suggested this week Ronald Koeman could also continue with Xavi taking up a different role.

Joan Laporta, the president who appointed Pep Guardiola coach in 2008, is also in the running.

Bartomeu’s opponents want to stage the referendum next week, but coronavirus social distancing restrictions could mean the vote being conducted around Spain later in November.

“When we receive the official reply from the regional government (on when the referendum can take place) the board will meet again” to make a decision, Bartomeu added.