Pep: Man City 'struggled a lot for many reasons' 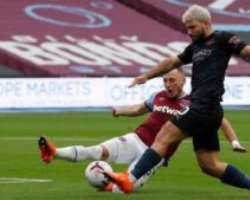 Nicholas Mendola
Manchester City's poor start to the Premier League season continued with a 1-1 draw at West Ham United on Saturday, a match in which Sergio Aguero left at halftime.

Unlike City's explosive loss to Leicester City , these dropped points were typical to what we've seen from Pep Guardiola's league disappointments during his time in Manchester: A moment of brilliance from the opposition, a hot goalkeeper, and wasted chances.

Aguero left the match at halftime, having returned from a long-term injury in Tuesday's Champions League defeat of Porto . Guardiola said vaguely, “It looks like a muscular injury,” leaving plenty of grey area at a position which has haunted City with Aguero and Gabriel Jesus injured and Raheem Sterling not fitting the bill as center forward.

A clearly frustrated Guardiola tried to explain his side's 2W-2D-1L start to the season.

“I'm not a guy who can predict the future,” Guardiola said. “We've already dropped seven points, which is a lot. But we've struggled a lot for many reasons. We have to take things game by game and see what happens.”

If Aguero is lost for significant time and any of their PL title rivals find their footing, City may well kiss its title hopes goodbye. City is two weeks away from its first meeting with Liverpool, which comes after Tuesday at Marseille, Halloween at Sheffield United, and a Nov. 3 visit from Olympiacos.

Part of the reason for Saturday's result was West Ham, as David Moyes' men were resolute in defense and tried to ride a moment of magic from Michail Antonio to three points.

The red-hot forward's bicycle kick was only good enough for one point, but Phil Foden says the Irons and goalkeeper Lukasz Fabianski were a stiff challenge.

Fabianski made six saves and followed Moyes' directive to get the ball away from their end, connecting on 16-of-27 long passes.

“We know they were in good form going into the game, which is something the manager touched on beforehand,” Foden said. “Their goalkeeper kept them in it, but we were just unlucky today. … It's been a strange year. A lot of games are coming quickly so maybe some players are feeling it. Everyone has the ability to make an impact.”