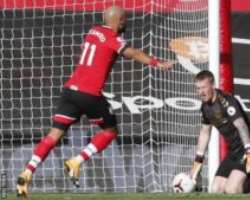 The last remaining unbeaten record of the Premier League season was ended as leaders Everton crashed to defeat against an impressive Southampton at St Mary’s.

James Ward-Prowse beat Jordan Pickford with a ferocious finish before Che Adams doubled the lead with the help of a deflection, Danny Ings involved in both goals.

Everton went into the game having taken 13 points from their first five games but missed injured captain Seamus Coleman.

Stand-in skipper Gylfi Sigurdsson struck the bar from 20 yards when the game was goalless, but the visitors struggled to seriously test keeper Alex McCarthy and finished the game with 10 men.

Full-back Lucas Digne was shown a straight red card after a nasty challenge on Kyle Walker-Peters, the second successive game in which Everton have had a player sent off after Richarlison’s dismissal in last week’s Merseyside derby.

It is one year since Southampton were humiliated 9-0 by Leicester City in front of their own fans, a result that had many questioning Ralph Hasenhuttl’s future.

Despite losing the next three league and cup games, Saints opted to stick with the Austrian and their loyalty has paid off.

This was their 16th win in 34 top-flight games since the crushing Leicester result, and it was every bit as impressive as last season’s eye-catching victories over Manchester City, Chelsea, Tottenham and Leicester which helped earn Hasenhuttl a new four-year contract.

Eight of the team involved in the Leicester humiliation started, including Ings, who provided both assists as Saints struck twice in the space of eight first-half minutes.

During a dominant first-half display, England forward Ings provided the pass for Ward-Prowse to smash beyond Pickford before delivering a cross for Adams to send a deflected shot past the Everton keeper.

Saints played with intensity and purpose.
Moments before Ward-Prowse’s first league goal since 28 June, Oriol Romeu went close from 30 yards, while, with the score 2-0, Stuart Armstrong beat Pickford but an offside decision meant it did not count.

After Everton were reduced to 10 men in the 72nd minute, Jannik Vestergaard forced Pickford into a finger-tip save.

Having lost their first two games of this season, Saints are now unbeaten in four, have three clean sheets in their past four matches and are up to fifth in the table.

Everton have won many plaudits for the start they have made to the season but Carlo Ancelotti’s side were very much second best against Saints.

Without the influential Coleman, Ben Godfrey started as a makeshift right-back but struggled on his first league start for the club.

He was not alone during a lethargic team performance, Sigurdsson lasting less than an hour wearing the captain’s armband before he was replaced.

Pickford, who came in for intense criticism following his challenge on Virgil van Dijk in last week’s Merseyside derby, was almost embarrassed late in the game by Ings after a back-pass by Yerry Mina.

Substitute Bernard added some much needed energy to the midfield when he replaced Alex Iwobi at the start of the second half.

But Everton failed to force McCarthy into one serious save, Dominic Calvert-Lewin managing just two touches in Southampton’s penalty area as he struggled for service. Shortest unbeaten start to season since 1967-68 – the stats

Both teams are back in Premier League action next Sunday – Southampton are at Aston Villa (12:00 GMT), while Everton are also away at Newcastle (14:00 GMT).