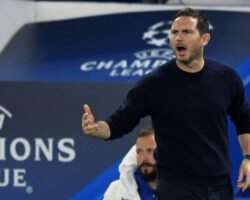 Frank Lampard on Friday urged his Chelsea players to step up and show leadership as he seeks to fast-track his Stamford Bridge revolution.

Winger Hakim Ziyech this week pledged to be true to his outspoken nature, and Blues boss Lampard said he welcomed such a bold approach.

New number one goalkeeper Edouard Mendy has explained how a spell without a club and claiming unemployment benefit shaped his career.

“Within the course of long, difficult seasons where we play so many games there will be moments when you rely on them to help you in tough times, and also to push the good times along, and to try and improve every day.

“I don’t think you can get on in elite sport, in any elite team sport, with people without any personality and character in your team.”

Lampard said Ziyech and Mendy had impressed him since walking through the door.

“Hakim has confidence about him and his fitness is coming on individually and he still needs time to get up his match fitness now his knee injury has cleared up,” he said.

“Both of those will be great additions on that front and I encourage personality and communication between players. We need more of that.”

The 28-year-old was likely to start Saturday’s match at Old Trafford but is now a certainty after Kepa Arrizabalaga was ruled out with a shoulder problem.

“It is very difficult because we have a bubble here at Cobham so we can’t play against the under-23s or bring across the kids to replicate 11 versus 11 games on big-side pitches,” he said.

“You generally want people to be working when you are not playing for five or six months off the back of an injury. So we missed that, he’s missed that.