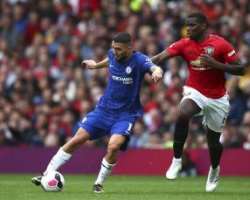 Both Ole Gunnar Solskjaer and Frank Lampard have had struggles early in the season, as their defensive units have collapsed multiple times.

After two good displays in the UEFA Champions League in midweek ( United won at PSG and Chelsea had a shutout draw at home v. Sevilla ) and plenty of injured players returning, there is a lot of optimism in both camps heading into this weekend.

Here's everything you need to know ahead of a massive early-season clash as Manchester United want to prove they are back on track, while Chelsea aim to kick on after a topsy-turvy start to the season. Team news ( INJURY REPORT )

Manchester United were without Harry Maguire for the midweek win at PSG as he missed out through injury and is hoping to be back soon. Axel Tuanzebe played superbly at PSG to keep Kylian Mbappe and Neymar quiet. Edinson Cavani is training with United and could make his debut for the Red Devils off the bench, while Eric Bailly is likely out for three to four weeks with a muscle injury.

Chelsea only have Billy Gilmour out through injury, as Hakim Ziyech is pushing for a start and Cesar Azpilcueta and Mateo Kovacic could come in to the starting lineup. What they're saying ahead of Manchester United – Chelsea

Ole Gunnar Solskjaer on confidence levels at Man United: “These boys can play. They enjoyed it. Attitude, work rate… you know the team spirit has been fantastic since they've come back from the international break so it's been brilliant. I'm just happy for them. I know we have quite a few possibilities in the way we're playing of course and you have to look at the opposition and how you want to play.”

Christian Pulisic on Chelsea finding the right balance between defense and offense: “We've got to find a balance. Obviously we want to create more chances and I want to help with that. We got to find a way to do both… Fitness-wise I feel great. I'm getting back to where I was. I feel strong and I feel like I can play 90 minutes. I'm happy.”

Manchester United (+140) are the slight favorites as Chelsea (+175) have struggled in recent meetings with the Red Devils' counter attacks. The draw at +260 looks enticing.

This really could be anything, couldn't it!? I'm going for a narrow Manchester United win as Marcus Rashford and Bruno Fernandes will just have too much for this shaky Chelsea defense. You don't know what you're going to get with either team from one week to the next. From the sublime to the ridiculous. Manchester United 2-1 Chelsea. How to watch Manchester United – Chelsea stream and start time