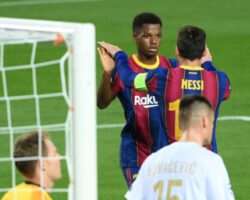 Sostres made the comparison in his match report for popular newspaper ABC following Barca's 5-1, Champions League group stage-opening win over Hungarian club Ferencvaros on Tuesday. Fati converted the hosts' eventual game-winning goal in the match after Lionel Messi opened the scoring from the penalty sport.

In his mea culpa, Sostres wrote he was “deeply sorry for any misunderstanding” and that he only intended to “praise the beauty of Ansu’s movements.”

He wrote in his report that “Ansu in full flight has something of a gazelle about him, of a very young black street vendor who you suddenly see running along Paseo de Gracia when someone starts shouting… that the local police have arrived.”

Barcelona forward Antoine Griezmann was among the many who took exception to that characterization. The French World Cup winner came to the defense his teenage teammate on Twitter, blasting Sostres' words as both racist and rude.

“Ansu is an exceptional boy who deserves respect like any human being,” Griezmann wrote of Fati, a Spanish citizen and national team player who was born in Guinea-Bissau. “No to racism and no to rudeness.”

Spain has a long and sordid history of racism within its game. During a 2004 friendly in Madrid between Spain and England, the latter's Black players were taunted by monkey chants by thousands of fans at Estadio Santiago Bernabeu. In 2005, Luis Aragonés, Spain's manager at the time, called France legend Thierry Henry “a Black s***.” A year after that, Barcelona forward Samuel Eto'o had to be convinced not to walk off the field during a trip to Real Zaragoza after being targeted by large sections of the crowd.

Brazilian superstar Neymar and compatriot Dani Alves were racially abused by opposing fans repeatedly during their time with Barcelona. And  as recently as January , Athletic Bilbao forward Iñaki Williams was subjected to racist chants from Espanyol supporters.