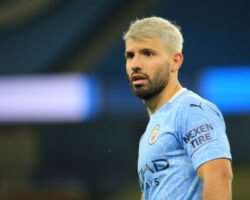 Manchester City forward Sergio Agüero could find himself in hot water with the Premier League after grabbing assistant referee Sian Massey-Ellis by the shoulder during City's 1-0 victory over Arsenal on Saturday.

The incident in question occurred just before halftime of the match in Manchester:

Gunners defender Gabriel appeared to clear the ball out of play off of Aguero's foot. Massey-Ellis, a Premier League assistant ref since 2011 and one of the few female officials in England's vaunted top flight, raised her flag and to signal for an Arsenal throw-in, much to the chagrin of the City striker.

Agüero immediately argued the call. He confronted Massey-Ellis, pointing to the line, apparently convinced that the ball was already on the other side of it when it struck him. When she walked away from him, Agüero grabbed her by the shoulder near her neck, briefly pulling the official back toward the goal line.

Massey-Ellis swatted Agüero's hand away with her left arm, and play resumed. While center referee Chris Kavanagh looked to be in position to see the incident, he didn't intervene, nor did Massey-Ellis ask him to.

The contact wasn't violent, but clearly it was unwelcome. Touching referees or their assistants for any reason during play is generally frowned upon. It can easily be punished by a yellow card. At the least, it seems likely that Agüero will be reminded of that fact before City takes the field again. It's also possible that the Premier League will discipline Agüero, who was making his first start of the season for City after recovering from the knee injury he suffered over the summer.

Raheem Sterling scored in the 23rd minute for the game's only goal.