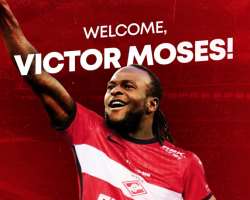 Victor Moses has completed a loan move to Russia League side, Spartak Moscow from Chelsea.

The former Super Eagles star spent the first half of last season at Fenerbache, before sealing another loan move to Inter Milan for the last part of the season.

The Nerazurri did not make his deal permanent and he returned to Chelsea to train with the loan squad.

He has now sealed another loan move to Spartak Moscow on a one-year deal with an option to buy.

Moses scored 18 goals in 128 appearances for Chelsea, the last of which came under Antonio Conte.

The 29-year-old retired from international football after the 2018 World Cup.

The former Wigan star will be hoping to impress in Russia to make his loan move permanent.