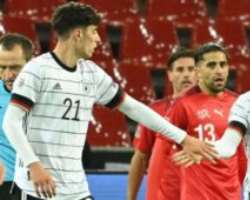 Entertainment value was high across the UEFA Nations League, where big performances from Ukraine's goalkeeper met another rough day for Germany's defense in keeping Group A4 from labeling a favorite heading into the final matchdays in November.

Elsewhere, Luxembourg scored a stunning, late, and red-card ridden win over Montenegro. And big ups to the Faroe Islands, who are on the precipice of promotion to League C thanks to a five-point lead on the field with two matchdays left. Ukraine 1-0 Spain

Days after making 10 saves against Germany, Georgiy Bushchan made eight saves — five of them inside the box — Ukraine got an incredible smash-and-grab win to keep the semifinals in sight but will have to find magic in Germany and Switzerland.

Not bad for a man who allowed seven goals to France on his international debut six days ago,

Wolves' Adama Traore was otherwise the Man of the Match in his first Spanish start, making three key passes while converting an absurd 10-of-11 dribbles and winning 12-of-15 ground duels.

Germany's massive defensive concerns have not diminished, even if its attack continues to deliver the goods.

Chelsea teammates Kai Havertz and Timo Werner scored, the latter also setting up Serge Gnabry for an audacious back heel goal in a 3-3 draw with Switzerland that kept Germany from overtaking Spain for the top spot in Group A4.

Joachim Loew's Germans have allowed seven goals in their last three outings and have not kept a clean sheet in seven dating back to a 4-0 win over Belarus in a November 2019 EURO qualifier.

Germany trailed 2-0 after 26 minutes after Atalanta's Remo Freuler set tup Mario Gavranovic for a fifth-minute opener before scoring himself.

Then came Werner's goal in the 28th.
Havertz made it 2-2 after halftime. Gavranovic put the Swiss up in the 57th minute but Gnabry's back heel made it three goals in six minutes and a 3-3 score line.

Spain's seven points keep it atop the group, one point more than Germany and Ukraine. Switzerland's two points have them looking set for relegation to League B.

Straight-up chaos in Podgorica, where first-half goals from Igor Ivanovic and Edvin Muratovic had it level.

An even game surprisingly went for the visitors when Norwich City loanee Daniel Sinani scored in the 86th minute.

It then really leapt up a notch with a bizarre stoppage time ruckus that saw Montenegro's Marko Jankovic and Luxembourg's Olivier Thill, a stoppage-time sub, sent off for violent conduct and the hosts' Marko Simic shown a red card for a verbal incident.

The result puts both on nine points, five ahead of sputtering Azerbaijan on Group C1. Elsewhere