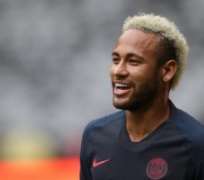 Alessandro Florenzi broke through for the title holders after seven minutes before Neymar scored either side of halftime to set PSG on their way to a fourth successive win.

Ismael Traore headed one back for Angers but it was only a brief respite as Julian Draxler, Idrissa Gana Gueye and Kylian Mbappe added another three more for the hosts.

PSG, who lost their opening two games of the season, jumped to second in the table with 12 points from six matches, one behind leaders Rennes.(NAN)