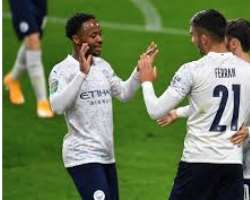 Ferran Torres scored his first Manchester City goal as the League Cup holders got back on track with a 3-0 win against Burnley, while Manchester United joined their rivals in the quarterfinals after beating Brighton 3-0 on Wednesday.

Pep Guardiola's side suffered their heaviest home Premier League loss under the Spaniard on Sunday when Leicester handed them a humiliating 5-2 defeat.

A brace from Raheem Sterling at Turf Moor ensured they washed away some of that bitter taste from that defeat and Spanish forward Torres, a close-season signing from Valencia, added City's third goal.

City have won the League Cup four times in the last five seasons and they remain on course to retain the trophy.

Guardiola's men would have won by an even bigger scoreline but for a fine display from Burnley keeper Bailey Peacock-Farrell.

Sterling and Kevin De Bruyne both started in a strong City side that also included Riyad Mahrez and a debut for 18-year-old midfielder Cole Palmer.

Sterling made the breakthrough 10 minutes before the interval with a powerful strike from Benjamin Mendy's cross.

The City forward doubled his tally on 49 minutes, finishing off a good move involving De Bruyne and Torres.

City put the result beyond doubt in the 65th minute when Sterling failed to control a Mahrez pass and the ball ran through for the 20-year-old Torres to slam past Peacock-Farrell.

Dominic Calvert-Lewin hit a hat-trick as Everton thrashed West Ham 4-1, but the win was overshadowed by injuries to the Toffees' Brazilian stars Richarlison and Allan.

Calvert-Lewin put Everton ahead with his sixth goal of the season after 11 minutes after Goodison Park.

Carlo Ancelotti's side, who have won six consecutive matches in all competitions this season, were pegged back by Robert Snodgrass's 46th minute equaliser.

But Richarlison restored Everton's lead 10 minutes later before Calvert-Lewin bagged his second treble already this season with goals in the 78th and 84th minute.

Ancelotti's joy was tempered by the sight of Richarlison and Allan limping off in the second half.

Newcastle survived a scare from fourth tier Newport before reaching the last eight with a 5-4 penalty shoot-out win after their 1-1 draw.

Steve Bruce's Premier League side fell behind early in the first half at Rodney Parade as Tristan Abrahams netted for the hosts.

But Jonjo Shelvey equalised with just three minutes left to force the shoot-out.

But Mark Gillespie saved Ryan Taylor's effort and Brandon Cooper blazed over the bar to hand the Magpies victory.

Tottenham beat London rivals Chelsea 5-4 on penalties after a 1-1 draw in the first last 16 tie on Tuesday.