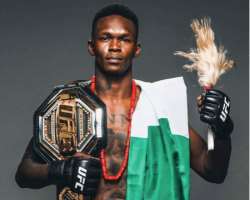 In a bout billed as one of the biggest in recent middleweight history, the charismatic Israel Adesanya made it look easy.

Adesanya dominated Paulo Costa, culminating in a TKO at 2 minutes, 59 seconds of the second round in the main event of UFC 253 on Saturday night in Abu Dhabi, United Arab Emirates.

With the victory, Adesanya notched his second successful UFC middleweight title defense. He is now tied with former middleweight champion Chris Weidman for the second-longest win streak in division history (nine), according to ESPN Stats & Information research. Anderson Silva is the all-time middleweight leader with 13 straight victories in the division.

It was only the second time in UFC history that two undefeated male fighters met in a title fight, and the first time since Rashad Evans vs. Lyoto Machida for the light heavyweight belt in 2009.

Coming in, ESPN had Adesanya tied for No. 4 pound-for-pound in the world with welterweight champion Kamaru Usman. At middleweight, Adesanya was No. 1 and Costa was No. 3.

After a lackluster performance in a title defense over Yoel Romero at UFC 248 in March, Adesanya said he wanted to make it a point to remind the media and fans how good he was. Adesanya landed more significant strikes in less than two rounds Saturday (55) than he did in the entire five-round battle with Romero six months ago (48), according to ESPN Stats & Information research.

"Trust me," Adesanya said in his postfight interview. "I had to make y'all remember. I had to remind the world why we the best."

The card took place at the recently built Flash Forum on Yas Island, which the UFC has dubbed "Fight Island." The promotion did its July slate of fights in Abu Dhabi and has returned for five weeks to Yas Island beginning with this card.

Adesanya butchered Costa's lead leg with hard calf kicks from the first minute of the fight. Costa attempted to bait Adesanya in the first round, putting his hands behind his back and sticking out his tongue. Adesanya kept his composure, stayed on the outside against the powerful Costa and peppered him with shots from distance.

In the second round, Costa's taunts had stopped but Adesanya's attacks did not. He continued the onslaught on Costa's left leg and mixed in punching combinations. Adesanya cut Costa with a hard left head kick, which was the beginning of the end. After catching a Costa body kick, Adesanya ripped off a nasty combination, culminating in a left hook to Costa's ear. Costa dropped, Adesanya got on top of him and landed punches on the ground until referee Jason Herzog called the fight.

"So much for fight of the year. But [it was] domination of the year," White said. "It was weird, because if you look at every other fight Costa has had, he goes after people like they owe him money. ... No matter what it was, Adesanya put on a clinic."

Adesanya (20-0) knocked out Robert Whittaker to unify the middleweight title at UFC 243 on Oct. 6, 2019. He was the interim champion before that. The Nigerian-born New Zealander has won all nine of his UFC fights.

Adesanya, 31, said after Saturday's victory that he wanted to continue the middleweight legacy of Silva, the former 185-pound champion.

"I wanted to do service to the middleweight division, and that's a hard act to follow," Adesanya said.

Costa (13-1) had won all five of his UFC fights going in. The Brazilian slugger has finished 12 of his 13 career victories. Costa, 29, is an alum of "The Ultimate Fighter: Brazil 3," which aired in 2014, and former Jungle Fight middleweight champion.

White said that the weigh-in staredown between Adesanya and Costa was the most-watched staredown on social media in UFC history, breaking the 2018 Conor McGregor vs. Khabib Nurmagomedov staredown by more than 1.5 million views.

In the staredown Friday, Costa pulled a Brazilian jiu-jitsu white belt out of his pocket and gifted it to Adesanya, who then threw it back at Costa, leading to a scuffle that White and security broke up. (ESPN)