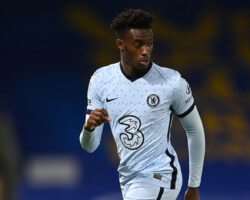 Football.london
Frank Lampard has confirmed that Cesar Azpilicueta remains Chelsea club captain but the development of Reece James means there is a chance that the Spaniard sees a reduction in minutes compared to previous seasons.

The 31-year-old came off the bench in Monday’s win away to Brighton & Hove Albion and, with James impressing, Lampard has welcomed the competition for places.

Azpilicueta’s introduction saw the academy product moved into midfield but the skipper can also play in a back three and left back and will remain a key player despite no longer guaranteed to start every game. “Yes, absolutely Azpi is club captain this season,” Lampard said. “He's done a great job of it. Since I've been in the role, he's been a huge help to me, how's he's handled himself on and off the pitch, how much he feels for the club, how much he communicates within the squad.

“We can all see the quality of Reece James and the competition I have in that right back position, but Azpi's professionalism means he's going to be as important for us this year as he always is. He is officially club captain.”

In terms of a potential reduction in minutes, Lampard added: “I can't ask players who are as competitive as Azpi to be content with missing one game. Every player here should be keen to play every game. I know Azpi is like that. I know him from very well from playing with him. I don't expect saints who say, 'OK, I'm not playing this game, everything's fine and rosy'.

“No, players need to want to play but, when you have someone like Azpi with the qualities he has as captain, I know he gives everything and I know that whether he plays or there might be times when he doesn't he will have the same positive impact on the group off the pitch. That's all I can ask for, it's a pleasure to have him here for that.”

The Chelsea head coach indicated he was surprised to see stories linking Callum Hudson-Odoi to a move to Bayern Munich this week.

The Bavarians, who have sold Thiago Alcantara to Liverpool, recently signed Leroy Sane from Manchester City but were interested in Hudson-Odoi last summer.

“Similar to Azpi, I'd be surprised if any player is not disappointed when they don't play games,” the head coach said. “I'd be very surprised by that. With Callum, the young player he is, he has to absolutely focus on the work he puts in on the training ground day in, day out. I've said it now quite a few times.

“When I select a team, I have to think about how players trained, how they play within the team, how we work on the ball and, just as much, how we work off the ball. I have no favourites here, I don't lean on people because I like them.

“I lean on people because I want people to be successful, which, in turn, will hopefully make everybody here happy. Callum is a young developing player and a lot of talk has come his way because of the way his career has gone at a young age.

“The facts remain the same for all young players in the squad, they have to work every day with the idea to put themselves in the frame to start.”