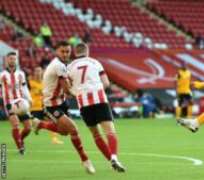 Wolverhampton Wanderers boss Nuno Espirito Santo says he believes “something special” is being built at the club after he celebrated a new contract with a 2-0 win at Sheffield United.

Raul Jimenez struck in the third minute of the two sides’ Premier League opener before Romain Saiss headed in a second soon after.

Nuno signed a new three-year on Sunday, keeping him at the club until 2023.

“It has been an amazing three seasons,” he said.

“I think we create something really special – the identity, the core of the squad, the bonds between us, this is how we operate but we have to stay humble.

“Now I have to prepare the next training session because we play Stoke in the League Cup. We go day by day.”

Both sides had enjoyed hugely impressive campaigns last term, with the Blades upsetting the odds to finish ninth on their return to the top flight, while Wolves secured seventh and reached the quarter-finals of the Europa League.

But it was Nuno’s side who picked up where they left off as they raced into a two-goal lead.

The home side looked sluggish and struggled to create many meaningful chances in the first half, with their first shot on target not arriving until seven minutes before the half-time, when Oli McBurnie headed at Rui Patricio.

A half-time team talk by Chris Wilder had the desired impact as United came out flying in the second half, with John Fleck striking the base of the post with a powerful low drive before John Lundstram just failed to get to a teasing Billy Sharp cross.

However, only a superb save by Blades debutant Aaron Ramsdale denied Wolves a third on the break as the 22-year-old – an £18m summer signing from Bournemouth – pushed a Saiss strike on to the post before Jimenez shot wide from the rebound.

Asked whether he was concerned that the Blades could be in danger of suffering ‘second-season syndrome’ and struggling this time round, Wilder told BBC Radio 5 Live: “I wish I had a pound for everyone who’s said that.

“There are 37 games to go. Whatever. Words and statements like there were last year come at us thick and fast if we lose a game; if we win a game we’re the best thing since sliced bread. If you lose it’s second-season syndrome – that’s the coverage the Premier League gets.” Wolves make flying start, despite lack of pre-season

Wolves’ performances both domestically and in Europe last season were all the more impressive considering the sheer volume of games they played as a result of their Europa League commitments.

The late finish to a season disrupted by the coronavirus pandemic meant Wolves have not had time to squeeze in any friendlies before the start of the new campaign.

But despite the lack of preparation they showed no signs of rustiness and they were at their clinical best from the outset, scoring from their first two chances of the game.

Jimenez showed great composure to let a cross run across his body before finishing and then Saiss placed a header beyond the reach of Ramsdale in the Blades’ goal.

The lack of preparation for the new campaign perhaps showed as they saw less of the ball in the second half, although they did still have the better chances on the break.

It would, as Wilder has rightly pointed out, be very premature to suggest this defeat is an indicator of Sheffield United being destined to fall foul of ‘second-season syndrome’ but there will be some causes for concern for the Blades boss.

Despite playing four pre-season friendlies compared to Wolves’ none it was the hosts who looked short of sharpness in the first half.

They were slow to build attacks and lacked bite in the final third, while their defence – the backbone of their impressive campaign last season – was well below par.

But they were much improved after the break as they pressed Wolves high, while the overlapping runs from defence that were utilised to deadly effect last season were also more prominent.

A significant portion of Sheffield United’s summer spending went on Ramsdale, who showed that he should be a more than capable replacement for Dean Henderson – returned to parent club Manchester United – with his superb second-half save from Saiss.

Otherwise Wilder has, so far, invested in promising youth rather than making wholesale changes to his squad in pre-season, and while his side’s first-half display will have left him wondering whether that decision was justified, the second-half performance will give him hope that the Blades can once again upset the odds this season.

“We move quickly on – that’s a lesson we learned last year,” Wilder added.

“It does hurt but you can’t dwell on it. All those teams that lost on the opening day, they’re going to have an unbelievable struggle and those who won games are going to get in the Champions League and push Liverpool and Manchester City. That’s just how the Premier League is and we’ve accepted it.

“Our focus is our belief. We need to tighten up on certain things and we go into the next game quickly looking to get a result to get us up and running.” A first since Mick McCarthy’s reign – the stats

Sheffield United have won their opening game of a league campaign in only one of the past seven seasons (D1 L5), but this was the first time they have lost in the first round of games in the Premier League (previously W2 D2).

Wolves are unbeaten in their opening league game of the season in each of the past eight campaigns (W4 D4), with this their first Premier League victory in the first round of games since 2011-12 under Mick McCarthy (2-1 v Blackburn).

Sheffield United have lost each of their past four games across all competitions, their longest losing streak under current manager Chris Wilder.

This was just the seventh time that Wolves have won a Premier League away game by more than one goal – five of those seven victories have come during Nuno Espirito Santo’s time in charge.

Raul Jimenez’s opener (two minutes 19 seconds) was Wolves’ quickest goal in a Premier League game since February 2011, when Matt Jarvis netted against Blackpool after a minute and 56 seconds.

Jimenez has scored 28 goals in all competitions since the start of last season – among Premier League players in this period, only Pierre-Emerick Aubameyang and Raheem Sterling have scored more (both 31).