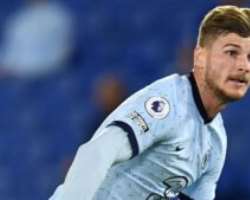 Nick Wright, Sky Sports
There were only a couple of minutes on the clock at the Amex Stadium when Timo Werner, Chelsea’s £45m signing from RB Leipzig, provided the first glimpse of what he can bring to Frank Lampard’s attack.

With an explosive diagonal run from left to right, the 24-year-old latched onto a long pass over the top from Reece James, dragging Ben White out of position as he did so, before firing a dangerous cross into the box which only narrowly missed the onrushing Mason Mount.

The assistant belatedly raised his flag for offside, meaning it wouldn’t have counted anyway, but the combination of speed, anticipation and awareness still made for a neat encapsulation of the qualities that persuaded Lampard to place Werner at the top of his summer wish list.

He arrives in the Premier League with a stellar reputation having scored 95 goals in 159 games for RB Leipzig. His pedigree is such that, even before kick-off at the Amex, Sky Sports pundit Gary Neville said he would be “absolutely amazed” if he doesn’t hit at least 20 goals for Chelsea this season.

But Werner hasn’t just been signed for his goals. He is also seen as someone who can give Chelsea something different to Tammy Abraham and Olivier Giroud up front, someone with the pace and acceleration to stretch defences and the intelligent movement to get in behind them.

It could be seen in those early stages at the Amex. Abraham and Giroud were caught offside less than once per game on average last season, but Werner had been flagged twice inside eight minutes. He was making the kind of runs Chelsea didn’t previously make often enough.

It was his speed and alertness that led to the opening goal. Werner was ready and waiting for Jorginho’s through ball after Steven Alzate had lost possession, and even though the pass was over-hit, he was still quick enough to get there before the advancing Mat Ryan to win the penalty. “He was onto that in a flash,” said Sky Sports pundit Jamie Carragher.

There were more eye-catching moments. Shortly before half-time, Werner launched a counter-attack deep in Chelsea territory before sprinting forward to join Ruben Loftus-Cheek, who should have done better with his return pass. “Werner is absolutely razor sharp and lightning quick,” observed Alan Smith on co-commentary.

Werner would have been in had Loftus-Cheek been able to find him on that occasion, but he created a shooting chance for himself not long afterwards, accelerating away from Adam Webster on the left-hand side of the Brighton box and unleashing a vicious drive from close to the byline which forced a panicked near-post save from Ryan.

Werner finished the evening without a goal, but that diagonal effort was one of five shots he attempted over the course of the 90 minutes. He was denied by a heroic block from White in the closing stages and there was a backheeled effort which cannoned into a Brighton defender too.

Chelsea will be encouraged by Werner’s sharpness in and around the Brighton box – “he has a real hunger to score goals and be ruthless in that area,” Lampard told Sky Sports afterwards – but it’s his willingness to drop into midfield and pull to the flanks which is most intriguing.

“I love the way Timo pops up in different areas,” added Lampard. “He’s not a frontman who attaches to centre-backs so much. Sometimes he can start from a little bit deeper, but when he goes, he goes.”

Werner’s movement caused Brighton problems throughout. Rather than being a static target up front, he was constantly on the move, often charging towards the box from the left-hand side. He made dangerous runs whenever Chelsea had possession and chased down Brighton players whenever they didn’t.

His work-rate was impressive, and perhaps explains why Lampard was happy to leave him on until the final whistle despite having Abraham and Giroud in reserve. According to Premier League tracking data, Werner made more sprints than anyone else on the pitch. Only the famously industrious N’Golo Kante covered more ground Werner was pictured with an ice pack attached to his knee after the game, revealing in his post-match interview with Sky Sports that his collision with Ryan for the penalty had hindered him for the remainder of the encounter. But it certainly didn’t look that way out on the pitch.

Quite the opposite, in fact. Kai Havertz was far quieter on his debut, suggesting he may need time to adapt to the Premier League, but Werner took to it without any problems. It seems he has already added a new dimension to Chelsea’s attack.